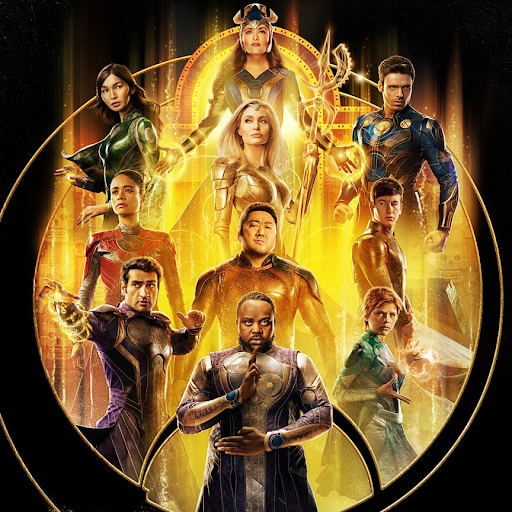 With the release of the new edition to Marvel’s repertoire, Eternals, comes the highly mixed reviews of its overall performance. Back in May, Marvel had released a teaser trailer of all of their upcoming projects, and fans along with myself were very excited to see the unveiling of a new superhero group. Fans have been nervous with the next phase of the MCU, and what characters Marvel are going to explore, along with introduce to the MCU. With the death of half of the original six Avengers, the MCU is beginning to take a tumultuous turn into the future with Eternals..

When creating a new superhero group like the Eternals, the right actors need to be chosen.

Just like with the original 6 avengers, the casting needs to be so good that the audience can’t imagine anyone else playing the characters. In the comics, the characters were originally portrayed as white with very little diversity about their overall appearance and characteristics. However, casting director Sarah Finn, decided to create, “…A big dysfunctional family,” as Gemma Chan said in an interview with the Hollywood Reporter. She also says when meeting her cast mates on set, she knew that she not only was cast to create diversity, but pieces of the actor were becoming apart of the character. Not only has Marvel been becoming more racially diverse, they’ve been very mindful of the disabled and LGBTQ+ community. Lauren Ridloff, a black actress, makes her entrance into the MCU as Marvel’s first deaf superhero. Among the diversity pool, Brian Tyree Henry also makes his entrance into the MCU playing the first LGBTQ+ character. However, this has been becoming an “issue” among the reviews. Some believe that the diversity aspect makes the movie too political, but personally, as a woman of an indigenous background with LGBTQ+ parents, it’s important to see this kind of diversity and inclusivity actors previously didn’t have. Others are complaining about comic accuracy, but Marvel has never fully made movies that are exactly the same as what the comics have portrayed, which is why they use the quote “Based on Marvel Comics.” Makkari, Laruen Ridoff’s character, is originally white and can hear, but the powers of the character are still the same, and she’s an eternal. What more could the audience want?

Eternals is the second movie since the start of the Covid-19 Pandemic to be released strictly in theatres, and I was excited to head back to Lynbrook to see what Marvel had in store for me. With full honesty, I was nervous as to what to expect, as the reviews were coming in like tidal waves, and the opinions were extremely mixed. After a couple of technical difficulties on my part, my friend and I entered the theatres within the 30 seconds of the movie. Maybe it was the 30 seconds we had missed with the written introduction of the Eternals, but something about the movie felt awfully confusing. Throughout the course of the movie, the scenes continued to hop back and forth in time, and I felt as if I was constantly playing catch up trying to figure out what was going on. There were multiple moments where my friend and I looked at each other with extreme confusion, struggling to pick the pieces back up and explain to each other what we had missed. Since the characters had split up at the beginning of the movie, they were trying to find each other for the first 45 minutes to and hour of the movie. Just when we thought all of the members of the Eternals were back together, we realized another person was missing. It felt like taking role call.

Once the characters were finally reunited (what was left of them anyway), the action sequence was on the build up, and the movie was finally starting to feel like it was moving. I kept thinking to myself, “We’re getting into the final groove of things, maybe the movie will pick up a little,” oh, how wrong was I. The action sequences were extremely slow, and there were multiple betrayals, obstacles, power faltering, and misplaced loyalty, where it almost seemed unclear where the characters stood with each other. I will admit however, once the final major action sequence finally rolled around, it was worth the wait.  The leader and strongest Eternal had finally explored her power, and gotten to the root of how to save the world. That very short, 30 second bit, was worth the wait. But that’s just it, it was 30 seconds. We didn’t get inside the head of the character who was mainly responsible for saving the world from peril, and there’s so much we as an audience we weren’t aware of. Whether or not this was intentional or not, it didn’t feel like there was more to explore, despite the fact that there was so much confusion. The ending of the movie left more confusion, and not in a positive way. Even with that, this movie felt like it left too much mystery and plot holes for the next movie to cover in a way that is understandable to the audience.