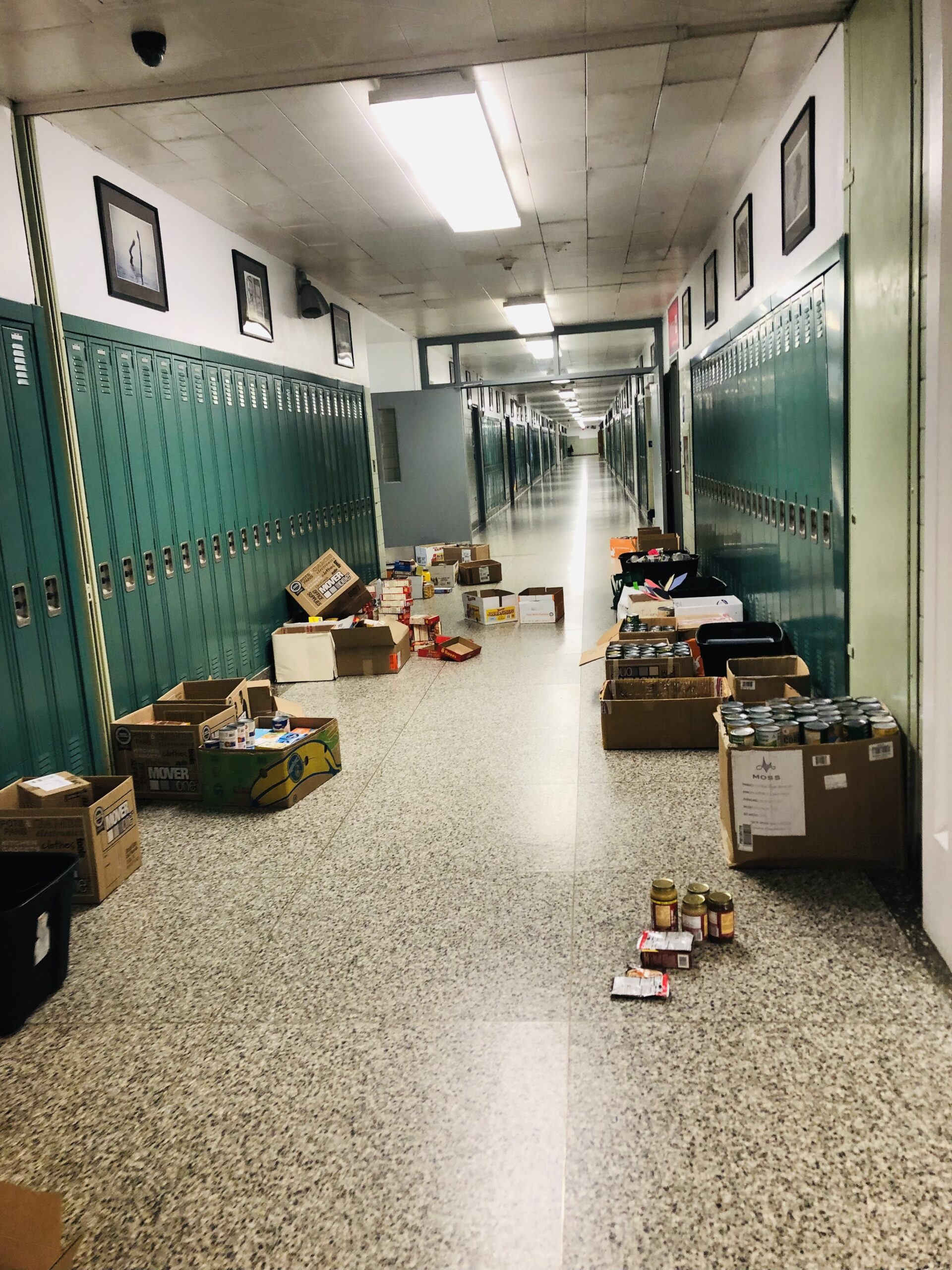 Every November, Oceanside High School has an annual Turkey Shoot: an event in which students bring food to the school that will then be bagged for needy families during Thanksgiving. The school gives out a list of food items that are needed for the packages. The items include stuffing mix, canned vegetables, canned gravy, crackers and cookies, canned yams, cranberry sauce, corn muffin mix, instant hot cocoa, and, of course, the turkey.

Day One of the Turkey Shoot:

Students are encouraged by many of the clubs and organizations at OHS to volunteer to bag the food. For bagging the food, students can earn an hour of community service. Last week, students filed into the cafeteria, received a brown cloth bag, a list of food items, and began to bag the food. Some people worked in pairs with one person putting the food in while the other held the bag open. Others worked individually. All of the bags were filled with food in less than half an hour. This is a clear testament to the amount of volunteers and their dedication to the task at hand.

Many teachers were on hand helping to bag the food as well. Mrs. Communiello, head of Student Activities, was at the event giving out bags and supervising. Once we were finished, I asked her when the second day of the Turkey Shoot would take place. She replied that the next day would be the following Saturday, November 20.

Day Two of the Turkey Shoot:

The second day took nearly four hours to complete. I was told to arrive at the school by 8:30 am since people would begin to pull up for their food at around 9 am. Our first task was to staple Thanksgiving cards onto the bags of food and tote them outside to the curb. Outside, volunteers waited for people to drive up and put the food in their cars.

After that was complete, our next task was to separate and count the remaining food that hadn’t been bagged the first day. The leftovers were stacked in the student lounge, filling boxes and every nook and cranny the room had to offer. We emptied the room and took up two hallways to separate the items. After that was finished, we had a mountain of stuffing mix, towers of cornbread mix, and hundreds of cans of corn, vegetables, and yams.

There were more bags that needed to be filled that hadn’t been packaged on the first day, and we were told to count out 400 cans of corn, 200 cans of yams, 400 cans of vegetables, and 200 boxes of stuffing mix. There were five of us working on counting the items, and it took us around an hour to move from item to item to count them all. Then, we boxed them up to be packaged.

After that, we still had more food left; Mrs. Communiello explained that the leftover food would be given to families for the holidays in December. The leftover food lined the hallways, so we boxed the remaining food in the biggest boxes we could find. We still had two large boxes filled with stuffing, large crates filled with corn and vegetables, and smaller boxes filled to the brim with desserts. Then we had to sort the miscellaneous items.

Some people donated items that were not on the list such as peanut butter, applesauce, ketchup, barbecue sauce, olives, and so much more. We packaged what we could in with the leftovers. Afterwards, Mrs. Communiello instructed us to take food out of some bags since it seemed like we had too many. Then those items had to be sorted.

By that time, Mrs. Communiello had her kids working hard with us sorting out the unbagged food. They made it into a game, taking up a hallway sliding items down, calling out the item’s name, which was then used to construct a food pyramid by Mrs. Communiello’s daughter. By the time we were finished unbagging and sorting the food, there was a mixed vegetable pyramid, a corn pyramid, and a yam pyramid, all neatly placed and perfectly geometric, enough to make any math teacher proud. Then, the people outside needed help getting bags of food into people’s cars and asked for three people to go outside and help.

They had an organized system outside: whenever a car would drive up, an older man would ask for the person’s name which he called out to the ladies at a small table. They would search for the name on a sheet of paper, get the address, and confirm that the person showed up at their appointed time. Then, someone would take a bag of food and a bag with a frozen turkey and put it in their car.

The people outside were either from the Oceanside Kiwanis club or other volunteers from the community. Many of the volunteers no longer even had kids in the Oceanside school district, but these folks still wanted to help. It always makes me happy and proud to live in Oceanside when I see parents who no longer have children attending OHS helping out. It was cold out and the bags were heavy, but these community volunteers stayed as long as I did. By the time we were finished distributing the food, it was noon. All of the food had been given to families in need and everything went as planned. This year’s Turkey Shoot was another success!