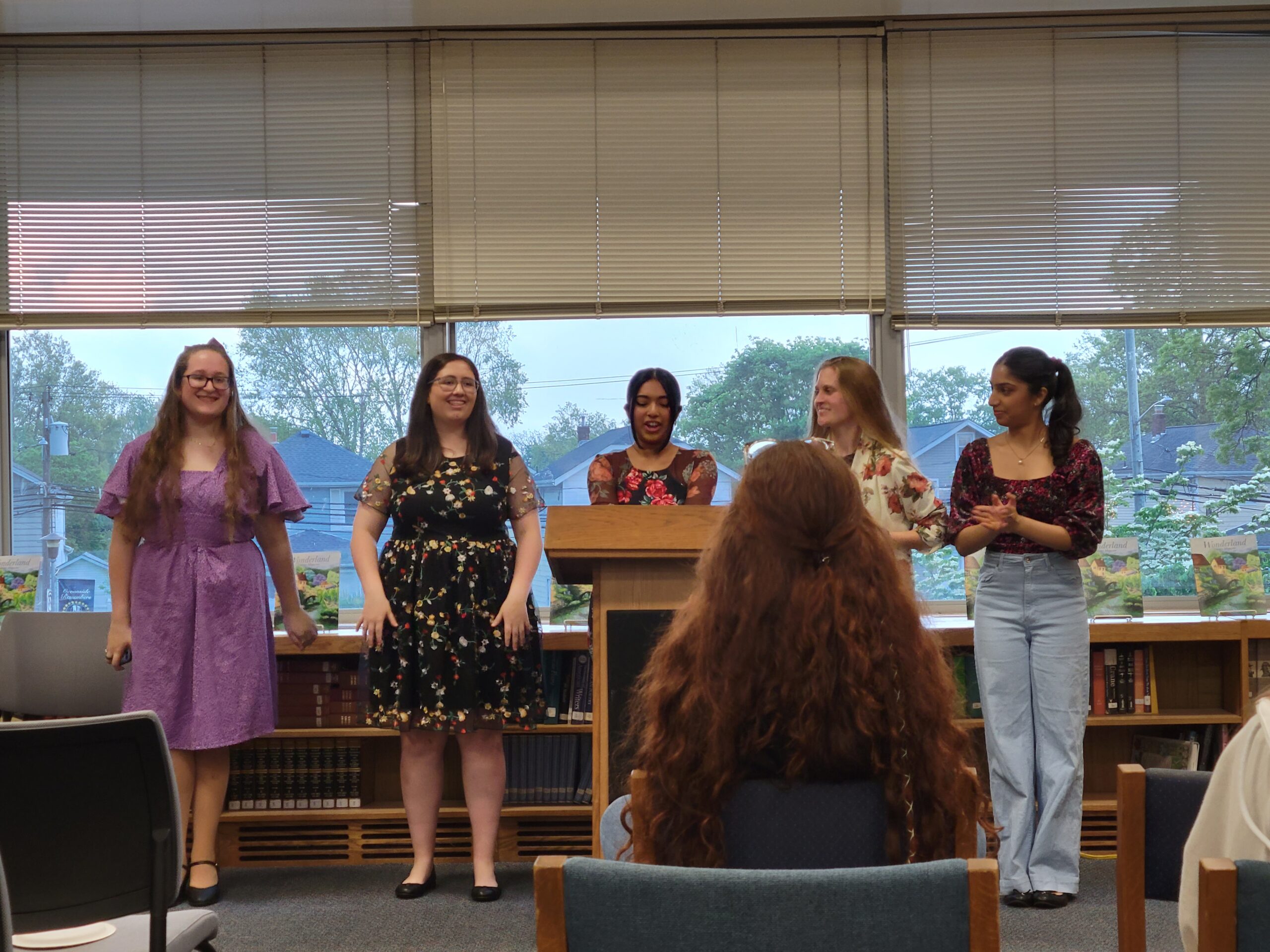 On Monday night, May 16th, Oceanside High School hosted its first Coffeehouse event in two years due to the pandemic. Each year, once OHS’ Literary Magazine – supervised by Mrs. Hennessy and Ms. Nigro – finishes its publication, the club hosts Coffeehouse in the school’s library. The event, which ran for 2 1/2 hours, showcased the artistic talents of OHS students. The night began with an introduction from Alliya Shamin, the Literary Magazine’s head of Social Media. Next year, she will be the club’s wonderfully creative President, taking over for senior President Vivian Rose.

The MC’s for the night were Riley Mazzocco (Treasurer) and Lynda Feustel (Secretary) who also read their own work later on in the evening. The first performance was by Adam and the Dudes, a ragtime trio of Adam Churnoff on trumpet, Sean Daly on keyboard, and Jason Gutman on trombone. It was a lively opener for the Coffeehouse event – usually the night is dominated by poets, but this year there was a perfect mix of poetry and musical performances.

After Adam and the Dudes, Alliya Shamin read a poem, followed by Claudia O’Reilly who also read a poem about a couple wondering about their relationship while looking up at the stars. Dahrian Bowe went next, also reading a poem that she had previously submitted to a writing contest! Unfortunately, due to the rain, Andrea Puca couldn’t make it along with a few other of the Coffeehouse performers. Hayden Policastro performed some stand-up comedy about her experiences at DisneyLand, completely blowing the audience away with her confidence and descriptive images of the gluttony and insanity of DisneyLand. Next up was Delaney Baccari who read a work entitled “Enemies” written by Wendell Berry.

The two MC’s did a great job of improvising as many of the scheduled performers were no shows due to poor weather conditions. Fortunately, Mehakdeep Kaur went up to fill time and talked about her fascination with ducks which was quite entertaining. The next performers of the night, Stephen and the Boys, got all their members together to perform some jazz. While Mehakdeep talked about ducks and instructed the audience to not feed them bread, the band waited anxiously for their bass player.

In order to fill some time, one of the guests at Coffeehouse, Giovanna D’Angelo, offered to read. Instead of reading poetry like the previous performers, she decided to read some of her own prose that sounded very poetic. It was a prose piece about her witnessing a car getting T-boned right in front of her. It became a traumatic experience for her and, at the end, she reminded everyone never again to look down at their phones while driving. It was an extraordinary piece and she, along with a few others in the audience, shed a few tears from her fearful description of the scene and her reaction, relating it to the greater good of humanity.

Once she was done, the band had magically found their bass player and began setting up donning the same round black jazz-esque sunglasses. There was some background lofi music for them to set up to as they got together music stands, amps, and themselves into neat rows. A few members of the band were missing due to the bad weather and other conflicts, but no one would have guessed there needed to be a drummer. They were amazing on their own. Stephen and the Boys is essentially the entire jazz band, consisting of Josh Javillo (saxophone), Josh Gutman (bass guitar), Adam Chernoff (trumpet), Brook Demoz (trumpet), Stephen Heidt (trombone), Carla Morales (trumpet), Vincent Calvagno (saxophone), Evan Kwait (drummer), Gabe DeGuzman (saxophone), Jackson Connelly (keyboard), Gavin Dryden (guitar), Jason Gutman (trombone), Sean Daly (keyboard) and of course the Steven Markman on trumpet. The band completely rocked it and played for about 15 to 20 minutes. There were a few soloists, but the most passionate by far was done by Vincent Calvagno. His talent on the sax was quite impressive and deserved an explosive applause!

After the band, Nathan Evan Sherman and his partner went up and showed the audience how they put together “twisty puzzles”, also known as rubix cubes. As Nathan and the partner began timing themselves, Nathan sat down very abruptly and then unexpectedly, began solving a rubix cube with both of his feet! Everyone was very surprised, waiting impatiently for him to solve it. It was unclear at first whether or not he was actually going to be able to solve the rubix cube with just his feet, but after only a few seconds, he was able to start! Everyone began gasping as he completed the puzzle, taking only 2 or 3 minutes for him to do. Finally he solved it and the audience went wild!

After Nathan and his partner’s interesting performance, it was time for Charles Wang to take the stage. Everyone knows Charles and the audience erupted with cheers and applause for him. He didn’t perform but simply reminded the audience that there were refreshments in the back room of the library and the pricing of our magazines.

Next up was Kaicey Rahn and her amazing rendition of “What Baking Can Do” from “Waitress” the Broadway musical. Kaicey was absolutely amazing – her beautiful voice rang throughout the library’s high ceilings. It was a beautiful performance of true talent! Kaicey was followed by MC Lynda Feustel who read a poem. It was a beautiful poem filled with fantastic imagery; short but sweet, Lynda’s poetry is always great! After Lynda, Cyla Umayan took the podium to play a sweet love song accompanied by her ukulele. As she sang, rain began to drizzle behind her softly, reinforcing the chill ambiance of the event. After Cyla, Michael Garcia went up to the podium and read a wonderful poem, a relatable story of a teen’s mind entitled, “Out Again”.

Next was Julian Avellaneda who played a Mexican love song. As he played the sweet melody of the song, lightning pierced the sky, juxtaposing the loveliness of the song with the harshness of the storm going on outside. After Julian’s performance, Riley Mazzocco, Literary Magazine Treasurer and MC, read a poem.

Then, for the third time, Sean Daly was introduced to the podium. He first played the keyboard for the Ragtime piece that started Coffeehouse and then again for Steven and the Boys. Sean’s performance was amazing; the poem had compelling imagery of the limbo between consciousness and sleep. It reminded the audience to be careful with the ideas in their head; they must be written down to be remembered for the next day, for if not, the idea may simply be forgotten during sleep.

Finally, the second to last reader of the night was Mehakdeep Kaur, the club’s Vice President. The poem was a beautiful reminder that new beginnings exist, a great second-to-last closing of the evening. She, too, spoke about her time at the Literary Magazine and how she ascended from Secretary to Vice President. As President myself, I can vouch for Mehak. She was a wonderful addition to the Literary Magazine team. She helped me make decisions when we were planning out the design of the magazine, from color schemes to which illustrations and images we should use for each page. It is always a necessary role in any club, but Mehakdeep played it well and made the club feel much less serious than it had to be. It was fun with her being Vice President. I wouldn’t have it any other way.

The same goes for Riley Mazzocco and Lynda Feustel. Lynda was helpful at every Tuesday meeting we had by getting sign-in sheets and writing the minutes for each meeting. Riley was not able to carry out her role properly due to COVID and restrictions on bagel and candy sales in the lobby to raise money for the club, and last year the club wasn’t even able to sell our magazines, despite the football team being able to sell shirts and their merchandise all throughout their season. Finally however, this year, the club was permitted to sell magazines in the lobby for $5 each and Riley was able to act as the club’s finest of Treasurers. So thank you so much to Riley and Lynda! They worked the technical aspects of the club which made each meeting run so smoothly.

Although Alliya Shamin is not a senior, she will be graduating to become the President of the Literary Magazine and will absolutely shine in her new role! Next year the club will need new members – people who not only write but are artists of all sorts. It truly shows that Coffeehouse highlights the arts by tying literature together with art in the magazine and allowing students to showcase their talents in music, poetry, story-telling, and twisty-puzzles during Coffeehouse. Riley Mazzocco, the Literary Magazine’s treasurer, summed up the evening perfectly: “We got to show students and parents what the club does and the professional product we come together to create…I can’t wait to see what the Literary Magazine Club does in the future!”

Next year, if you enjoy any aspect of the arts, please join the Literary Magazine!