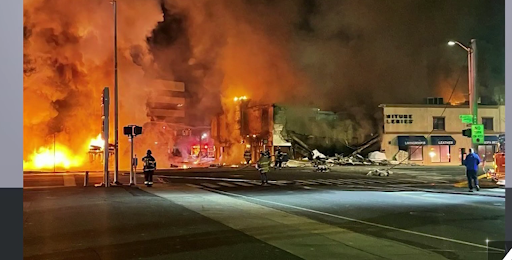 Shortly after 1am Wednesday, a tanker truck carrying about 9,200 gallons of gasoline crashed in Rockville Center. The resulting spill caused fires to spread to two buildings as well as the streets around them.

Although investigators have not officially said what caused the crash, a member of Nassau County’s Arson and Bomb squad said that based on surveillance it appears a car cut off the tanker causing it to crash. Officials said that the tanker first crashed into the Bargain Liquors and then the La-Z-Boy storefronts. The gasoline leaked into the streets and the store fronts, quickly igniting. Both stores were engulfed in flames, the flames were so intense they caused the La-Z-Boy sign to melt. The burning fuel also traveled into the surrounding roads. The burning fuel soon leaked into storm drains and traveled a quarter mile. The fires in the storm drains caused explosions underground, these explosions caused many manholes to explode and be launched into the air. Luckily, no one was seriously hurt in the explosion or subsequent fires. The driver of the tanker as well as 3 firefighters suffered minor injuries.

The environmental impacts of the incident are thought to be insignificant since the spill was contained. Although officials have said that oil did make its way into the Mill River, it will not impact the river. Officials said they are putting booms down to clean up the oil. Booms absorb oil and will be used to clean oil off the surface of the water. The Coast Guard has also offered to help, they mapped the spill and where oil might leak. The Department of Environmental Conservation will oversee the clean up. County officials said the spill will not affect the environment or people living in the area.