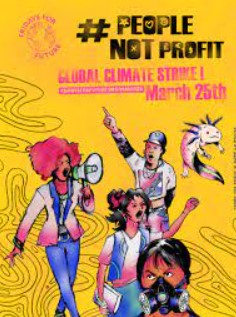 (Part 2 of a 2 Part Series) – At the end of March, OHS Senior Vivian Rose attended a climate change rally in Brooklyn. Here, she chronicles her experience and shares her interactions with other protesters .

In order to distinguish between regular protesters and the organizers of the event, the organizers wore the same “Fridays for a Future” t-shirts and carried bullhorns.

Luckily, I was able to converse with several of the organizers, who were all high school or college students. The first organizer I spoke with wore a mask with green rhinestones lining the edges. This organizer declined to give a name, but I’ll call her “Jenna” for context.

Q: What got you into the Fridays for a Future movement?

A: I found FFF through Instagram and I’ve always been interested in climate change. I had protested individually but never through an organization. And then I decided to apply, and the second I got involved it was very welcoming. I got involved two months ago, so most of the organizing [for this event] was happening then.

Q: How do all the FFF organizers here today meet together?

A: We met over Zoom and we use Slack which is an app. We have a lot of working groups, so I’m a part of social media, policy, and anti-racism groups. There’s one general meeting a week where we all discuss different things. We reach out to a lot of organizations as well in the government and in the DOE to make sure that everything we do is right.

Q: How can someone apply to be an organizer for FFF?

Q: Is there a limited number of organizers?

A: No. We are a youth organization, so we prefer high school students joining, but we have college students participate and help out. We also have people who are older and act more like mentors. They help us figure out different things since they are more experienced than us. But mostly if anyone – any highschooler – wants to join, it’s not hard for you to join.

Q: Do you ever get to talk to Greta Thunberg?

A: So, not personally – and I don’t know about other members – but I do know that I have a contact in other regions like in Germany, and I have some contacts in Washington D.C. so I know they have spoken to Greta. She did come to the 2019 strike [in NYC].

Q: Do all the organizers have to be from New York or the city to organize in this strike?

A: Well, this group is New York City, but the international Fridays for a Future sets the date for the next strike and the theme. The theme this time was “People over Profit” and then all the local groups do their own thing. So this is the New York City chapter, but right now there are protests happening all over the world. Also, you don’t have to be a resident of NYC – [one organizer] is from New Jersey, but most people here are from New York.

The second organizer I spoke with was very outspoken, wore a long gray overcoat, and loved being behind the bullhorn. It was refreshing to speak with such a passionate young person with similar interests as me.

Q: Where did you hear about FFF?

A: Well so last strike in September, somebody in a discord server that I’m on, posted a link saying that there’s going to be a march in two months. It said there would be a meeting an art building very close to where I live. I went, met the organizers, saw that they were super cool, so I joined them. I didn’t get to do much for the strike in September, but I got super involved and now here I am! That’s my story of how I got here, but it’s super easy to join. Their Instagram has a ton of helpful links for how to join us.

Q: What’s your role for FFF?

A: So, one of my roles is to be on the onboarding working group, so I work on making sure people are getting in; I’m supposed to be the integrator for the external relations board – which we use when people are talking to us and we have to communicate with external organizations – that’s also my job. I don’t work on social media, but I have done some graphics for them – my art’s been on their Instagram. Other than that, I usually do odd jobs and attend the weekly meetings.

Q: In your experience, how does the outreach and communication aspect work in FFF?

A: We have a few contacts, so I have a contact in an organization called “Kids Fight Climate Change” and I talk to them, we talk very closely with XR – which is an extinction rebellion – and they’re really great. Same with Earth Guardians, but in terms of outreach – which is my job – I haven’t really been able to do.

Q: How have strikes been in the past?

A: The 2019 strike, which was really big, reportedly had 200,000 people there. Probably because the DOE excused school absences and a lot of people just wanted to skip class. But, it did draw a lot of attention the issue; 2019 was the peak of climate activism, everyone cared. Also VSCO girls were a thing! Now, this is a smaller strike, which is probably because of COVID. COVID kind of broke the pattern, because we had a strike in September of 2019, and we were supposed to have another one in March 2020 – obviously it didn’t happen because of COVID. So that broke our stride a little bit. But I don’t have a ton of personal experience working with FFF before COVID.

Q: So, since you just joined after COVID, do you still feel like you’re part of a community here?

A: Absolutely! Everyone is just so welcoming. I love the organization, and I love the people in the organization. I totally feel like I’m welcomed here. You know, they put me in the front, which I’m thrilled about! I’ve been to a lot of press photos!

The third and last organizer I spoke with gave his name – Henry Shane. He wore a navy blue yarmulke and was the loudest organizer of them all. Speaking with him, I hoped to see him on the national stage one day, taking on a large role within the federal government so as to raise awareness for climate change.

A: I am actually a college student. I’m a Freshman at the New School, and specifically I go to the Eugene Lang college of Liberal Arts and Sciences, where I am a political science major.

Q: How did you hear about FFF?

A: I got involved with Fridays for Future in NYC back in September 2021, and I heard about it when I moved here in August of 2021. I’m originally from the San Francisco Bay Area, where I did a lot of community activism, and I wanted to continue this activism when I came to New York City. I was previously involved with the Sunrise Movement in California. When I came to New York, I reached out to FFF NYC and told them I was new to New York and wanted to do anything I could to help them all and step up and fight this climate crisis which is disproportionately affecting Queens, and the Bronx, and Brooklyn, but impacting so many communities around the United States, and around the world; especially black and brown communities, as well as indigenous communities.

Q: You seem like you’re a well-known organizer here. Are you one of the front leaders of the NYC chapter of FFF right now?

A: I would not like to say that I am higher up than anyone else in the organization. If anything, we think we are all equal in FFF for New York. We don’t have a hierarchical system – we are all doing the same amount of work. We are all giving our fair share. Personally, I have been an activist for four years now. I started in my freshman year of high school due to the Parkland shooting in Florida. I originally got started with the March for Our Lives Movement, and I do gun-violence prevention work. I always like to view activism as a way to use your privileges and what you’ve been fortunately given and the opportunities you’ve been given in society to better our society – to uplift communities who have been pushed down and silenced in history. So I am very thankful and fortunate for the many opportunities I’ve received growing up throughout my childhood in the Bay Area, and now with that platform, I have the purpose to give back to communities and uplift communities who are not being heard. And so, within Fridays for Future, a lot of the work that I’m doing right now is not only uplifting communities but doing the necessary work. For example, when I walk back from the strikes today, I will sit in front of my computer and set up meetings with local, state, and federal elected officials, going through the nitty-gritty boring policy-work, and actually changing policy and legislation in our society…We are dying right now at the hands of the climate crisis, and no one is doing anything about it except for our generation. And so it is necessary that we pressure our elected officials at every level of government and say ‘no more’, that ‘you must listen to us!’. If we don’t do this work, then we will not have a habitable living future in 40-50 years. So we must do this work now, and we must continue this work after today. And, we have to remain hopeful – if we remain hopeless, then no one is able to move forward. Climate change is not a lie – do not let our planet die. All this work must be centered around Generation Z. We are the future of this world.

How to Have a Voice

As amazingly stated by the organizers above, it is necessary for more young people to be involved in the crises of our times. No matter the problem, whether it be climate change, gun violence, or racial or gender issues, it is necessary for every young person to be aware of what is happening. The worst enemy of change is silence, so we must always be thinking and asking how to promote and maintain change for the better.

Research your favorite movement, follow the leaders on social media, and get involved with strikes and marches. We must all take action to create a better future for ourselves and all the generations that will come after us. And, in the words of the FFF marchers: “We are unstoppable, another world is possible.”